A secret beach lures visitors in the know to Fort Bragg, an unpretentious town in Northern California.

Glass Beach is one of the most unique beaches in the world, not because nature created it that way, but because time

and the pounding surf have corrected one of man’s mistakes.

rocky coves – and that’s not too far from the truth.

What is now called Glass Beach began in 1949 as this city’s garbage dump. This is hard to believe these days, but back

then people dumped all kind of refuse straight into the ocean, including old cars and their household garbage, which of

course included lots of glass. They tried to control what was dumped in the early sixties and dumping of any toxic items

was banned. Finally the North Coast Water Quality Board realized what a mistake it was and plans were made to begin

a new dump away from the ocean.

You could easily miss the town while driving north. Head to the end of Elm Street, just north of the Georgia-Pacific

Only a dirt path indicates that the end of the rainbow lies beyond.

Shimmy down to the shore’s edge.

Emerald, ocher, amber and ruby bits of ground glass sparkle beneath your feet and in the tumbling tide, where years of

surf have polished them to a muffled shine.

The colors might reveal a kaleidoscope of shapes and colors. 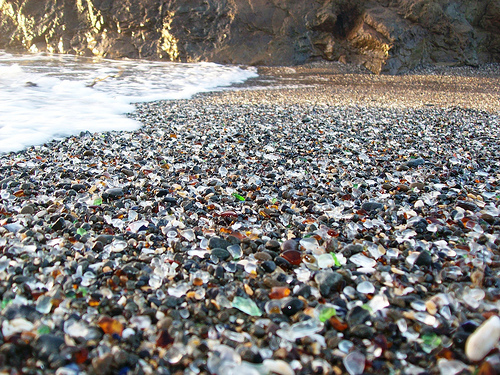 sometimes whole cars – over these cliffs, then owned by Union Lumber Company and known locally as “The Dumps”.

A resident remembers poking around the junkyard as a kid during the 1930’s.

There was always a fire lit in order to reduce the trash pile, which might explain how that chinaware melded into a slab

of solid rock. It used to be a playground for the children of the village.

Despite rumors this resident says a glass-bottle factory never excisted on this coastline.

In 1967 Fort Bragg’s leaders wised up and closed the area. The pounding surf started to heal the shore over the next

several decades, grinding the castoffs into the glittering treasure that now covers the beach.

Now, over 30 years later, Mother Nature has reclaimed this beach.

Since then, the place has become a beachcomber’s paradise and a living science lesson in one.

According to the resident, automobile companies started making car taillights out of plastic instead of glass after World

In addition to searching for and collecting glass, Glass Beach had a very interesting array of tide pools to explore.

Crabs, mollusks and manu aquatic plants make their homes in these ever changing environments. It is very nice to

spend your whole day poking around the tide pools and watching the busy little worlds that go on insed each one.

Since this property became State Parks, visitors are not allowed to take the glass. 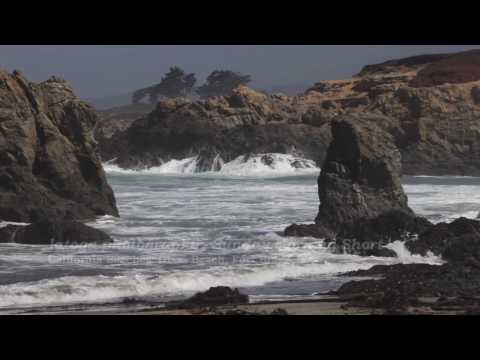