Sand is a loose, granular material and one of the most common natural fabrics on earth.

Sand consists of very small stones, which vary in sizes between 63 µm and 2 mm. When the sand is smaller than 63 µm

Sand usually occurs as sediment, that is to say that is has been transported by water or wind. That’s how dunes,

beaches, deserts and rivers arose. The sand is usually from rubble of rocks, but can also be of organic origin (shells, 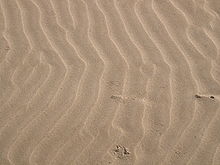 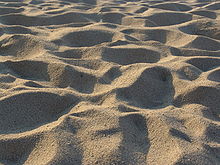 Almost everywhere you can find sand. It forms dunes and beaches along the shores. But you can also find it in rivers

and streams, in and around lakes, in caves, mines and sandpits, on mountainsides and hills, near glaciers, in deserts

and as sediment in the seas.

There are many varieties of sand, each with their own geological composition. Certain kinds of sand you can only find in

the tropics, others near volcanoes.

You can often see where the sand came from by the colors and the structure. The degree of rounding and the grain

size tell you something about the way the sand went.

Sand from the Netherlands

There is a big similarity in the properties of sand along the entire Dutch coast, because the Dutch North Seacoast is one

Along the entire Dutch south coast the sand is light brown to sallow.

North of Wijk aan Zee the sand is more white. According to the foresters of the Schoorlse Dune it can be explained by

Sand also occurs in large parts of the Dutch surface. Especially the higher parts of the Netherlands are very rich of

sand; on those places the Pleistocene erosions come to the surface. In the glacial period the land ice, that reached the

Netherlands, boosted old river erosions to the surface on the Veluwe and the Utrechtse Heuvelrug.

In the Roerdal rift in the eastern part of Brabant are old, more coarse river sands buried more than 10 meters deep, but

in Limburg you can find coarse sand in gravel erosions which are just under the surface.

Coarse sand in large rivers are mostly found upstream. The size of the grains usually decreases, as the sand is found

further downstream. Coarse sand is also found in the gravel layers in the bottom of the North Sea, especially the

bottom west of the Zuid-Hollandse and Zeeuwse island and on the Klaverbank.

More fine sand is found in almost the entire Dutch surface. It is used as filling sand. In the West- and North of the

Netherlands are large quantities of marine sands from the Eemien and Holocene age close to the surface, what makes it

profitable to mine the material. 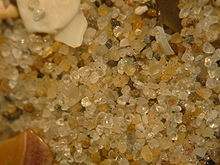 In Lommel people win quartz sand of high quality since 1891. It was already discovred in 1845. This sand is very pure

and is being used in the manufacturing of glass. It is also found in Dessel and Mol. In the visitor centre next to the

Glass House in Lommel you can find the largest sand collection of the world, more than 13.000 samples.

Sand is usually formed by the mechanical and chemical demolition of rock, just like silt and gravel. In that case it’s

called detrital sand, that finds its origin mostly on the land. Other terms used are lithogeen, a-biogeen, terrigeen,

When you think of sources of detrital sand, you think of the weathering of continental granite of volcanic rock.

Basalt is a volcanic rock that is very commonly found on the islands in the ocean, where it’s mainly eroded by the sea.

surfs are high. Parts fall off of the cliff, sizes from grains till huge rocks. This happens both directly by the water and by

the force the waves make indirectly on air. This air is pressed into cracks and cavities of the rocks and can be powerful

enough to crash the surrounding rocks.

A third source of detrital sand you can find in the sea. From a little shell fragment, a piece of coral or a little grain of

silt, grows a very round, smooth sand grain by the deposition of unsaturated seawater with dissolved calcium

carbonate, probably as a reaction to the constant wetting and drying of the grains.

This process takes place in shallow, warm, tropical surface water. When more deep, colder water of the ocean flows to

the surface, the sediment of calcium carbonate may be caused by the evaporation and the loss of carbon dioxide

(caused by warming and photosynthesis).

The grown ooïdes look like tiny pearls and consist of skins like an onion. They grow until they are so large that the tidal

That’s how the so called deposit sands or oolitic sands come into being. You can find them on the Bahama’s, in the

Persian Gulf, in the Red Sea and on the eastern continental plates.

In the Great Salt Lake in Utah the sands mostly consist of calcium carbonate. In this case ooïdes form around waste of

a microscopic saltwater shrimp. The grown grains are soft and absorbent. They are found in Belgium. 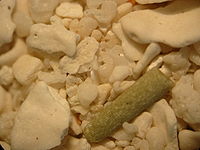 The green rod is a sting of a sea urchin and is about 4 mm in length.

Biogenic sand (bio: life, genic: made by) is an organic substance and mostly comes from the sea. It can be of animal or

vegetable origin and is often light of color from the lime.

It consists mostly of skeleton remains of sea organisms. It’s made of the remains of foraminifera; the empty shells form

halve of the sand on Hawaï.

organisms. For this corals get dissolved calcium carbonate from the sea water. Tropical coral reeves only arise in

shallow, clear, clean and warm waters near the coast. White beaches exist for an important part of the droppings of the

coral eating parrotfish. In the south of the Great Ocean are a few red coral beaches, mainly from the orange red to red

brown remains of the pipe organ coral. This gives a light pink to orange color.

Most of the detrital rock is from the land. Rocks in the mountains crumble, for example because in winter the water in

the cracks freezes and expands. Melt water transports the material to the rivers, from where the little stones are being

carried further. In this process the material more and more wear off to smaller parts.

Once in the sea the material is being further transported and eroded by the tidal flows and the surf. Many rocks and

cliffs keep hold of the sand and beaches are formed.

along the coast of gets into deeper water. Most of the sand is transported from the beach to near storage places; the

sand is temporarily being deposited in cavities and sand canals about 15 meters from the shore.

In the tropics the year is divided into two natural surf seasons, summer and winter. The surf of winter (October/April) is

the result of storms and hits the north and west coasts of the islands in the Great Ocean. The high waves are famous

among the surfers, but this surf also has a great influence to the beaches. Sand is being replaced in large quantities

along the shore, from one beach to another and some beaches have been faded away completely. 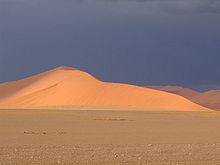 Sanddunes in the Namib-desert, the oldest desert in the world.

Demolition material of rocks also can be transported by wind or land ice, in which the way of transportation has an

influence on the properties of the sand. Wind can replace fine sand over great distances. On the land it is one of the

most important means of transport of sand, but only a few grains will be blown away further than a few paces. But

there are exceptions. Tons of desert sand are moved by air, sometimes thousands of kilometers away.

This way the most fine sand can even be blown over the seas. This sand erodes very much, because the grains

sandblast each other. But itself the sand also can erode other objects. It can wipe away the base of rocks which results

in a rock that appears to stand on a pedestal. The blown away sand forms dunes around obstacles, these dunes ecome

an obstacle itself and the dunes grow. This way dunes can become higher than 30 meters.

In deserts many dunes move because the sand is blown over the top and then fall down in the lee of the dunes,

sometimes the dunes move over a distance of many kilometers. 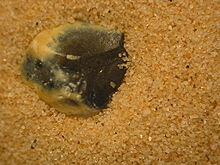 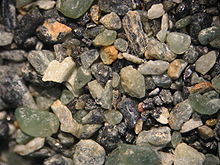 In this sand of Corsica you can find grains of the mineral olivine,
which causes the pale green color of the sand.

Sand can exist of different components.

– First: a large part of the sand exists of little fragments of stone and minerals, especially inland and outside the  t

sands consists of calcium and therefore they dissolve in acid.

– Third: sand can be formed in a chemical way. This is the case with evaporates and oolites.

Sometime bottles and other human waste eventually reduced to sand. This happened on Glass Beach in California and 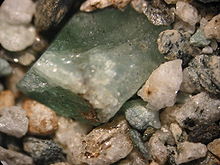 This sand is from a stream in the Habachtal (Austria) and it contains a few pieces of emerald.

Continental rocks are dominated by granite and other rocks have a large content of feldspar, mica and quartz. These

darker grains. These are the heave minerals which can be used to find the original source. Some beaches consist of so-

called placer-depositions, where certain heavy minerals are selective concentrated. For instance titanium can be gained

The hardest, chemical most stable components of sand eventually remain, that’s why many sands mostly consist of

quartz, a mineral that often occurs in the earth crust and is exceptionally hard. A sand that consists almost totally of

The dunes of White Sands National Monument in New Mexico is an area of dunes of more than 700 square kilometers.

The dunes exist almost completely of gypsum. This is very rare because gypsum is a mineral that normally will be

washed away by the rain.

The dunes of White Sands National Monument in New Mexico is an area of dunes of more than 700 square kilometers.

The dunes exist almost completely of gypsum. This is very rare because gypsum is a mineral that normally will be

washed away by the rain.


The color of the dark beaches is caused by the presence of iron and magnetite. These sands are being attracted by a

You also can find semi precious stones, like olivine, garnet and sapphire. Even gold can be found in sand. 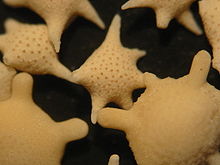 Japanese starsand, of which the largest skeletons have a diameter of 2 mm.

Starsand consists of remains of little star-shaped foraminifera, which mostly live in the waters south of Japan. The

Japanese legend tells that they were the children of the Polestar and the Southern Cross. The dragon god of the sea

got angry because the Southern Cross didn’t ask for permission to bear her children in his sea. He ordered one of his

servants – a gigantic snake – to kill the star children. The snake ate all of the dead bodies and spit them out into the

ocean, where they were driven to the beach and changed into little star-shaped grains. The people from nearby villages

decided to burn the starsand in aroma burners, this way the children of the Southern Cross could return to their mother

According to the legend this is the reason why the Southern Cross is surrounded by many little stars.