I collected 4 different kind of sands on the Sand Motor

The Sand Motor is an innovative method for coastal protection.

South-Holland at the town of Ter Heijde in 2011.

Wind, waves and currents will spread the sand naturally along the coast of South-Holland.

This is called “Building with Nature”.

The coast will be broader and safer.

The importance of sand

Every year, the sea takes sand from the Dutch coast. Every five years, Rijkswaterstaat replenishes the shortfall

by depositing sand on the beaches and in the offshore area.

If it wasn’t done, the west of the Netherlands, which is below sea level, would be exposed to the sea.

The sand replenishment operations every five years do the job, but can the coast be protected in more

By building the Sand Motor, a peninsula on the coast near Ter Heijde, we will try to find out whether nature can

spread sand along the coast.

The coastal defenses are now at maximum strength as the Sand Motor starts to take shape. 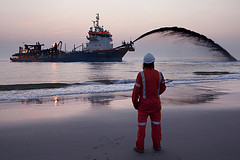 Between March 2011 and November 2011, Rijkswaterstaat and the provincial authority of South Holland will

It will extend 1 km into the sea and be 2 km wide where it joins the shore.

Trailing suction hopper dredgers pick up the sand 10 km off the coast and take it into the right place.

Two offshore replenishment locations alongside the peninsula are also part of the Sand Motor. 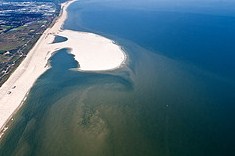 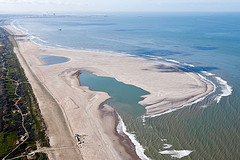 The Sand Motor is a great example of building with nature.

By depositing a large amount of sand in a single operation, repeated disruption can be avoided of the vulneralble seabed.

Nature will take the sand to the right place.

If the Sand Motor fulfills the expectations, sand replenishment off the Delfland Coast will be unneccessary for the next 20 years.

Unique in the world

The Sand Motor is the first experiment of its kind.

With this pilot project, the Netherlands is continuing to set the standard in water management.

In 2011, we are doing this by actually working with water, instead of against it.

If the Sand Motor works as we expect, the concept can be rolled out to other places in the Netherlands and the rest of the world.

The hook-shaped peninsula will change the form of the coast, creating new currents.

as the situation develops, because it will not be safe to go into the sea everywhere.

So you should keep an eye on sighns on the beach, and alsway follow the recommendations

of  the beach rescue services.

The ban will be lifted in designated areas only when we are sure that bathing is safe.

The ban is expected to remain in place for the northernmost tip of the Sand Motor.

The Sand Motor is open for recreational purposes. Visistors will be able to ramble over the enormous sand shoal.

Seals may also be present on the Sand Motor.

Of course, nature – young dunes for example – needs time to develop. After a few years, visitors will be able to forage

in the new nature, which will be allowed to develop freely on the Sand Motor.

The Sand Motor provides a new option for anybody looking for space, and peace and quiet, as a refuge

from the hectic life in the cities of the western Netherlands. 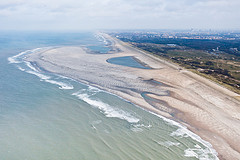 – 2012-2032: wind. waves and currents spread the sand along the coast between Hoek van Holland and Scheveningen.

– Better flood protection for the province of South Holland.

– Extra room for nature and recreation.

– Ultimately this will result in 35 hectares of new beaches and dunes.